Welcome to the bi-pocalyptic world of GHOST OF ZOMBIE!

This, like my other two series, is a passion project, which I’m creating as proof-of-concept. Thanks to a bunch of years working in front of the camera I’ve met a number of trustworthy individuals in LA (I know, its like finding Bigfoot in a three-way with an alien and the Loch Ness Monster), so I am constantly pitching with the hopes that one day the right person sees the awesomeness presented to them.

Other than the help you are giving me, by giving my characters life, I am doing everything from writing and editing to sculpting and animating. But I love doing it, so no shits given. Who cares if I’m not making a dime and I don’t have enough dimes to fill a sack heavy enough to beat myself unconscious with. Which brings us to…

In the past I have asked friends to “help out,” and I have been humbled by their generosity. But I always get a pit in my gut when I ask for favors, so on top of the perk like giving you credit on iMDB, talking you up to all my friends, and sending you gifts of artwork, I’m scraping together whatever I make at conventions this year and giving it to you wonderful people, which equals… I have no clue yet. I understand if you have an hourly rate or flat fee for doing a job, we freelancers gotta freelance, but here’s what I can offer: A buck a line. If you just thought, “Fuck that,” I get the initial response. But I give you this guarantee: I don’t make shit! I will give you something you will be proud to be a part of and a character that you will love to voice.

So, if you’re still with me and wanting to join the GHOST OF ZOMBIE family, please meet…

The soon-to-maybe-be-voiced-by you characters of RIM CITY.

A little history: GHOST OF ZOMBIE is a book I wrote a bunch of years ago wherein a kid comes back as a ghost and a zombie at the same time, and the story follows the two as they try to get along and survive in the wasteland that was our world. For this animated series I’ve expanded on the idea and given GHOST/ZOMBIE a family to relate to and enemies to combat. As you read the description of the characters keep in mind that I modeled the family on the Rose family on Schitt’s Creek. 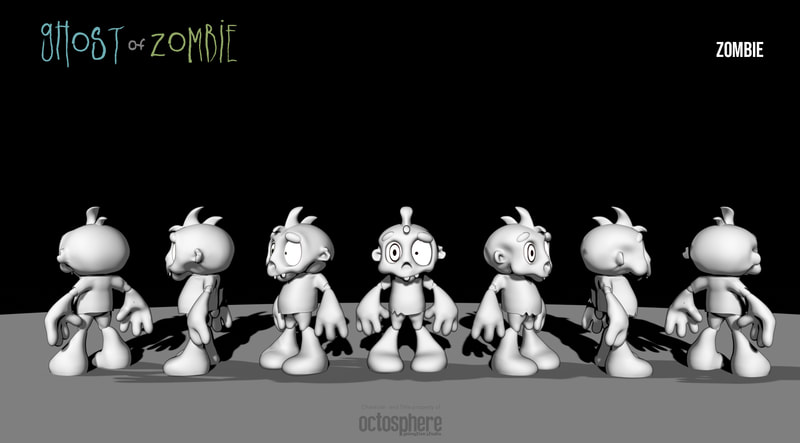 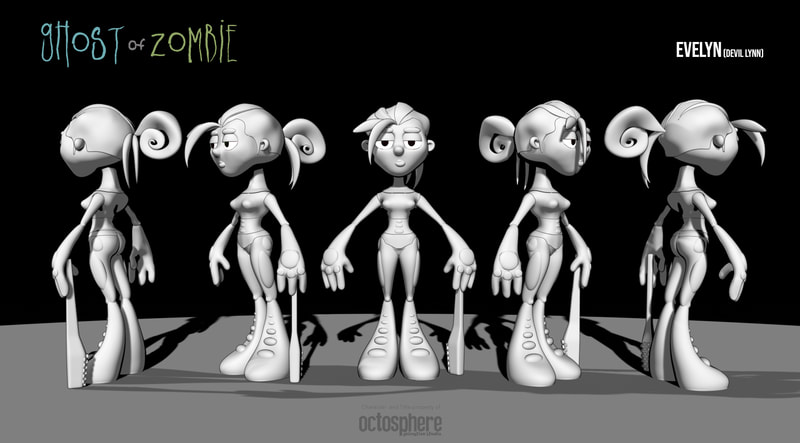 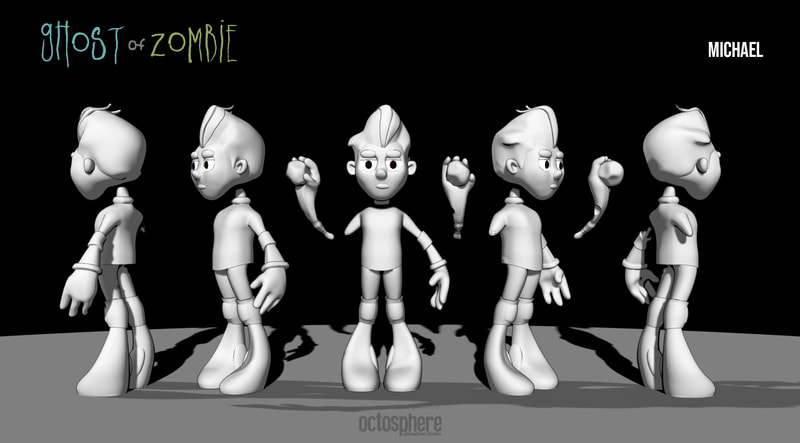 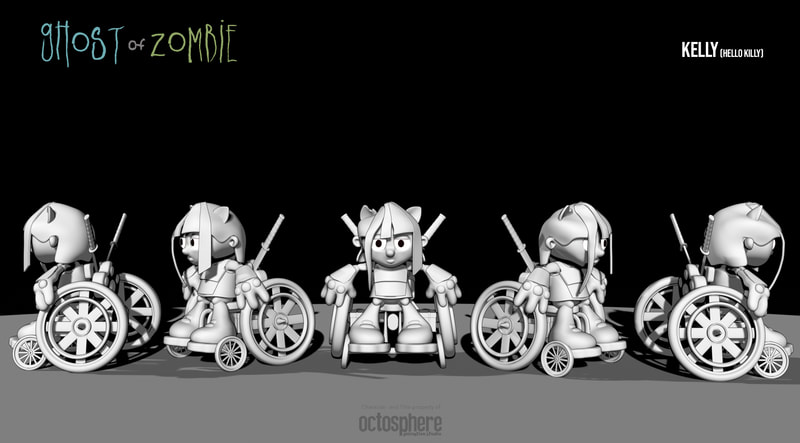 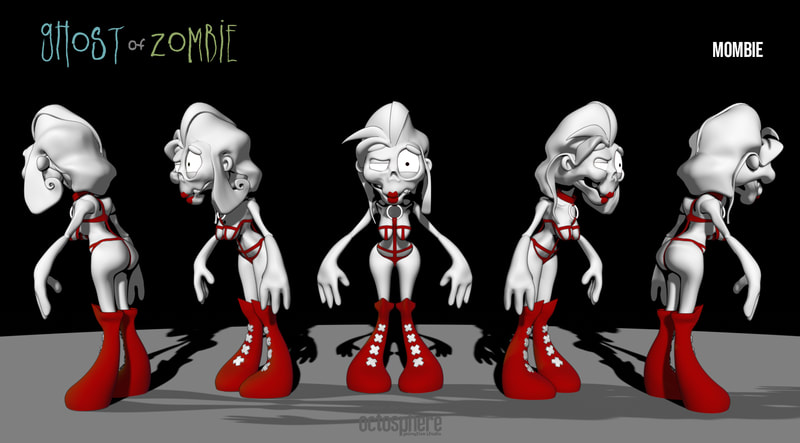 GHOST & ZOMBIE:
Zombie is the body. Ghost is the brains, and Ghost is extremely sarcastic and quick-witted. It comes from him being a brilliant kid when he was alive — genius level smarts. He’s always been the “smart one,” which led to a lot of bullying and not many friends. He lived during the aftermath of the first world-ending event so he’s skilled in survival and on navigating the wasteland. With Zombie, Ghost has to depend on all his skills to keep his brain from getting bashed in by some hunter, while using Zombie’s undead strength and venomous bite as a weapon to get what they need and protect their family. For Zombie the challenge is creating a library of grunts, which can be used in response to whatever Zombie is saying. He’s not a growling beast or mindless ghoul. He’s a mini Frankenstein Monster with a kind heart and childlike innocence.

EVLYNN (Evil Lynn):
Before the world went to shit a second time, Lynn was a Velma in the corner of the cafeteria with her head buried in a book. Now, on the streets, she’s the number two zombie slayer with a raging hard-on to be number one. Her only problem is she has no idea how to be popular. She’s a nerd with a deadly swing and the wardrobe of Lara Croft. This is a world where women are in charge and she’s looking to be Queen.

​MICHAEL:
If I could afford Dan Levy I’d be done. Michael is a lot like David Rose. He cares about how he looks and how others see him. He doesn’t care much about his own future, but he will do everything in his power to help his sister. He’s not a fighter, and after losing his arm to a zombie bite he sticks to Lynn’s side whenever out. His goal is to make her the most popular zombie slayer in Rim City.

DAD:
He’s a Dad. He wants to solve everyone’s problems and at the end of the day he wants to see his family happy and safe. He would be friends with Morty’s dad, Jerry Smith, and be annoyed with Peter Griffin, but still be nice to him. Dad has his flaws as dads do, but the one thing he has in abundance is love for his family — especially for his wife… who is a zombie, but that’s not slowing him down one bit.

KELLY (Hello Killy):
Kelly lives in a fantasy land is a bit nuts from a life of seclusion. She had a huge crush on Ghost/Zombie when he was alive and those feelings haven’t gone away. She may seem sweet and innocent, but Kelly sits on the throne of top zombie killers and her kills get more likes than any others in Rim City. The only thing is no one knows what she looks like. There are legends about what she looks like, but know one really knows. When she is unmasked at the final battle we see Kelly is in a wheelchair, which makes her kills even more impressive, but at the end it’s hinted that Hello Killy isn’t who everyone thinks she is.

MOMBIE:
She’s a zombie, but the love she has for her family hasn’t died. If anything, it’s only strengthened. To be honest all I need for Mombie is a bunch of zombie-mom groans, grunts and growls. Since Mombie has no "lines" we'll have to figure out a flat fee for her.

The script can be downloaded below.
Pick whatever scene(s) you feel like acting out and go for it.
You’ll find I’m very easy to work with and trust is what I'm all about.
I'm a big supporter of improv so if you think of a line, quirk,  joke or think a line sounds better another way, add it in.

If you have any questions please contact me at patrickhtdoyle@gmail.com
You can also send your files or a link to that address too.
Thank You for all you do. I look forward to hearing from you!!!